You might say Jim Kibblewhite has always lived life on the edge. His oceanfront house stands on the Western edge of the continent, a place where cliffs slide into the sea, truly on the edge of the world: but he lives for a different edge; performance. Specifically, increasing the performance of motorcycle engines, a job he’s done around the world for 65 years. But to any motorcycle rider, the most intriguing chapter in Jim’s incredible life story is the tale of his Autorace days in Japan.
You’ve probably never heard of Autorace. It’s like no other motorcycle event in the world, a combination of lottery, Las Vegas, and speedway motorcycles, Japanese style. Each municipally-owned Autorace stadium seats thousands of spectators. Five to eight riders, on identical motorcycles, chosen by lottery from a rider’s pool, race around a 500 meter asphalt-surfaced oval track. There are up to 11 heats per day: the main event occurs at the end of a week’s racing. Each spindly machine has just two gears, weighs less than 200 pounds, and has a magneto ignition high-compression 663cc twin cylinder motor producing 50hp. Handlebars are grotesquely twisted, to allow them to be straight when the rider is leaned far over. The rider controls the bike with the throttle and with his right knee, which is hooked behind a metal bracket fastened to the frame. Speeds around the concrete oval vary from 70 mph around the corners to over 90 on the straights: average lap speeds are around 84mph. Riders bash together and jostle for position. No brakes are allowed, and spills are frequent.
To protect their body from the grinding track surface, each rider wears ‘kamikaze’ body armor and helmet covered with a single, bright color. Races are held rain or shine, using the same narrow treaded tires. During race meetings riders live at the stadium next to their motorcycles, trapped inside guarded rooms, and are not allowed to contact anyone in the outside world. Contact with any outsider could allow Yakuza - the Japanese Mafia - to control racing and earn illicit billions of yen. Many millions ride on each race. Bets are placed on each race-thus the importance of the single color, so the betting public can easily follow the action out on the track. 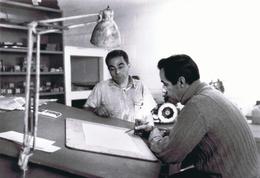 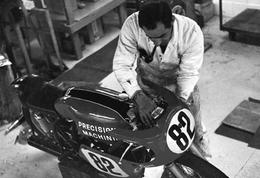 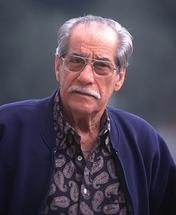 Conditions for racing were different when he went to Japan. “Riders race in the center of the field, and they live in guarded rooms at the track. And they can’t talk, no telephones, nothing. They can’t even call their wife. They race for a week or more, then one day after the races end they’re let out and can go home. It’s like jail. I was one of the few non-Japanese people in the tracks, and luckily I could go back home!”.
That first visit, he wasn’t sure he could make anybody’s bike faster. “when I first went over, I said I don’t know if I can get these things to run any better, they’ve been racing for years - but when we got out to the race track and looked at one of the motorcycles, you could take the drive chain and stretch it half an inch - then I got into the engine, and things were so bad, I said, we’ll have no trouble. I worked all that night and got that engine done, new chains, guides, cylinder porting. The rider took it out and his eyes were round!
“I enjoyed working on those old Triumphs, getting them running well. The stock Triumph 650 twin had 35, 39 horsepower on the dyno. With some piston, head and porting changes you could get them up to well over 50 - I even had one get up to over 70hp in Japan, on their dyno!” Jim spent almost 11 years commuting to Japan, first working on Triumphs, then the new HKS motors which eventually replaced them. “I had about five riders using my engines exclusively, maybe I had a hundred engines out with other riders. It’s a big business. Races go rain or shine, weekdays and weekend. There are six tracks around the country, each holds twelve races a year. Racers make big money, but it’s tough to learn. You want to be a rider, you go to a school, and you can’t contact anyone while you’re learning--for ten months!. Some riders last a long time: Keiji Kobayashi placed second at Funabashi a couple of weeks ago, and he’s over fifty “.
“When I built HKS engines, there was one bike I got up to 91.7 hp. That was too much power. The rider said, ‘I can pass these guys whenever I want’. I said, make like you’re fighting for it, and then at the end, just barely go by. Well, he couldn’t do that. This was in the All-Japan Championship race, with a $100,000 prize at stake in the main. And he won his heat so easily, the race commission demanded to see inside his engine. One look at the cams was enough: I should have nitrided them so they were the same black finish as the standard items. They banned him for six months. But they had to let him go out for the main event, because so much money was riding on him. I changed the cams back to stock, replaced the exhaust system with one I’d tuned for the stock motor, and he still had enough power to win!”
Increased costs of racing the HKS engines, and the rumors of a change to another engine, ended Kibblewhite’s tuning days in Japan. But he’s still building engines for budding racers: local Northern California youngster Danny Casey races Kibblewhite-built Rotax and Honda CR 450 engines in dirt track events.​ 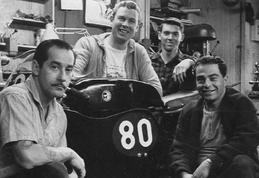 “That Honda engine is good. I don’t know how much more I can get. Honda says it puts out 45 hp, although on my dyno it gets 39 - but I reckoned that the cam was eight degrees retarded. I asked Honda for the timing figures, and they told me ‘That’s proprietary information’ You’re kidding, I said. You are selling bikes and you don’t give out the timing information any more? Luckily, the cam mounts on the sprocket with a simple bolt mounting, and so I slotted the sprocket in the arc of the bolt circle. and was able to make up the eight degrees right there. Now we’ll try to get over that 45 hp figure!
At age 82, you might expect Jim to devote himself to more peaceful hobbies than motorcycle racing. But while others are pottering in the garden, Jim’s working in his home machine shop, or setting up an engine on the dyno in his garage (the neighbors are used to it now, besides, it’s well soundproofed). Seeking extra performance has been a lifetime’s work for Jim Kibblewhite, and he’s not ready to give up life on the edge. 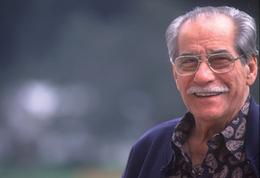 View from the Edge

​The life and times of Jim Kibblewhite 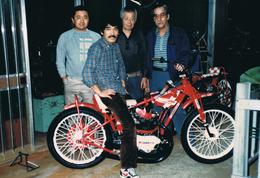 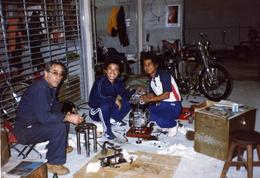 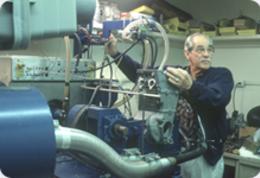 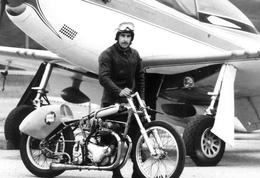 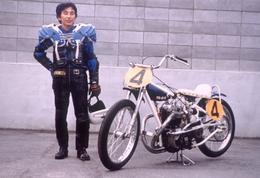 Autorace started as Speedway racing on dirt, introduced in 1934 by US rider Putt Mossman. Gambling on the results started immediately, and over the years as bikes got faster and pots larger, more and more riders crashed. In 1968 the Japanese Government stepped in; it surfaced and widened the tracks, eliminating sliding and most of the crashes, and cleaned up the gambling to ensure it earned taxes on it.
Now Autorace is more popular than ever, with whole magazines listing nothing but rider’s statistics, number of wins, places, finishes. Today, riders compete with Suzuki engines, but up until the late eighties, the engines racers had to use - the rules prohibited them from riding anything else - were vertical twin Triumphs, or Triumph-clones like the Meguro. In 1989, the rules changed to allow competition on HKS machines, engines that had double overhead cams and horizontally-split crankcases, but otherwise were externally identical to the 1950s vintage Triumphs.
Theoretically, having riders all ride the same motorcycles would even out the competition. Some races are even run with a complicated handicapping system so that rider skill is balanced out. Today, engine differences are no longer a factor. Riders and tuners are not allowed to interfere with engines, which arrive from the Suzuki factory in crates and are sent back there for overhaul. But back in the Triumph era, although the rules stated that each machine had to be the same, a certain amount of tuning went on. Which is the reason Jim Kibblewhite found himself running a workshop in Japan, after building up his own successful aftermarket performance company in the US. From his birthplace in Auckland, New Zealand, 82 years ago, Jim Kibblewhite traveled around the world several times as a marine engineer - don’t believe the stories about a girl in every port, he says, he usually had two - before landing on the waterfront in San Francisco, and starting Precision Machining, Inc.. The company has been purchased and is now run by Will, one of Jim’s ten children. Kibblewhite was easing out of the machine shop - his son had been working for the company since the age of 11, was eager to take over the business- and he was offered a perfect part-time job. “A group of Japanese businessmen came knocking on my door in 1979. They asked if I wanted to make half a million dollars building engines and making parts. In Japan. So off I went, two months at a time”.

​   Jim started racing speedway himself forty years before that: as a youngster, apprenticed at Mason Brothers shipbuilders in Auckland “Racing Friday nights, I’d make a few valve guides and valves at the company during the week. Money was short, I had to hand over what I made at home”.
Then the war interrupted Jim’s racing career: after a stint in the NZ Army, he worked at a submarine base in Australia, welding huge diesel tanks in 100 degree heat “It was a lot hotter inside!” he laughs. Somehow, he managed to get hold of a 500cc Triumph, a bike that nearly was the end of him. “I rode out into the desert, where you wouldn’t see more than one car a week, and fell into a deep rut. The bike cartwheeled and ripped open a vein in my leg. Blood and gasoline were leaking into the sand, the question was, which to fix first? I started with the bike, pushed it up against a rock so it stopped leaking gas. Then I wrapped baling wire round my leg: luckily, it was the left one, so I could still start the bike. Somehow, I wired my leg to the footpeg and rode back. When I came to the first farm, I was lucky again: the farmer’s daughter was a nurse, and after I crawled in, she took the tourniquet off immediately, saved my leg”. After six weeks in hospital, Jim was off again, this time for India, followed by his first visit to San Francisco while an engineer on an American ship. He’d be back.
Meanwhile, the war in the Pacific intervened, and Jim worked for the Military Sea Transportation Service and then after that ATC Army Transportation Corps in Taipei and the invasion of Okinawa. After living and working in Panama and Italy, Jim landed in hospital in Marine Hospital, Staten Island, New York, in 1948 “They diagnosed coronary problems. There was a Puerto Rican gentleman in the ward, and nobody except me spoke Spanish: I translated for the medical staff, and soon the patient’s young niece was visiting me instead. Maria and I were married in 1949, and we headed out to San Francisco”
Precision Machining, Inc. started in San Francisco around 1951, although Jim kept his full-time day job on the waterfront until 1970. “I’d build race bikes, go to races, and we won a lot of races. Traveled from here to LA, over to the East Coast”.
He remembers the work that went into one special bike, Bill Lyons’ Amateur Class Daytona Winner in 1967. “I made a five speed gearbox, changed the frame to allow the two carburetors a straight shot. We won the Daytona event with ease, and Art Bauman won Indianapolis and Carlsbad on that bike.”